One of the challenged of getting the new  Southeast Area Farmer’s Market locations off the ground has been recruiting vendors to sell chemical free produce. Several vendors have stepped forward to make these markets a success this past summer.  Let’s shine the spotlight on two of them today. 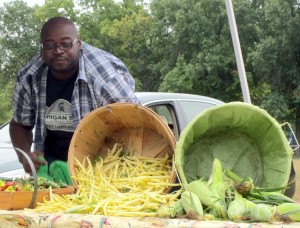 Robert Tolbert Sr. has come to both market locations all season long. Mr. Tolbert grows his produce in a plot in the Hillcrest Community Garden and at a garden on his own property. Last Saturday at Garfield Park, his wife, Jeannie, and son, Robert Jr. were on hand selling the bountiful turnips, collard greens, tomatoes, peppers, giant green beans, corn and peppers.

Jeannie stays out of the garden but helps out by washing, bundling and displaying the crop at market—and she does a beautiful job. “My husband, he loves to see things grow,” Mrs. Tolbert says. 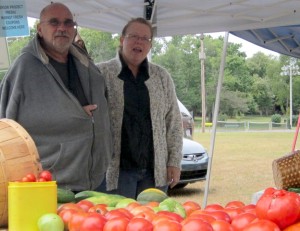 The Kasses bring produce from their half-acre, chemical free garden in Kent City. Bob Kass grew up in the Garfield Park neighborhood so enjoys getting back to his roots, so to speak. “We got more than we can eat so we’ve been giving produce away to the food pantry. If we sell some, too, then we can replant next year,” Mr. Kass says.

Last week, the Kasses brought several varieties of Kale, tomatoes, sweet corn, apples and herbs to market. “Fresh grown produce is hearty and yummy,” says Mrs. Kass. “I can eat as much of it as I want and it doesn’t matter—I  lost 80 pounds by eating fruits and vegetables instead of other fattening foods!“

You can use your Project Fresh, Senior Project Fresh, WIC or Kent County Health Department coupons for produce at either Southeast Area Farmers’ Market location. We also accept EBT/Bridge Cards and participate in the Double Up Food Bucks program. The market locations are:

Both Southeast Area Farmers’ Market locations are open through Nov. 6.