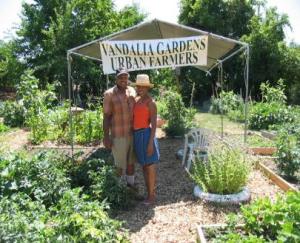 With the opening of the 2012 Southeast Area Farmer’s Market season more than four months away, you might think our vendors are enjoying some leisurely time off. Not so! Take a look at Ms. Leslie Huffman and Mr. Cornelius Williams from Vandalia Farms. After consulting with Grand Rapids neighborhood growers and OKT’s garden posse, Ms. Huffman placed an order for food-plant seeds. These seeds will be planted next month in specially selected growing medium at the former Molesta Greenhouse on Madison Avenue. The vacant greenhouse owner, Dave Molesta, let OKT grow seedlings there in 2011, as well.

In all, Ms. Huffman will oversee the planting, care and distribution of approximately 10,000 food plants. Many of these plants will be given to the gardeners and small farmers who sell produce at the Southeast Area Farmers’ Market. Others will go to yard gardeners and community gardens participating in OKT’s Food Diversity Project. The food you may be eating next summer is already on its way to being grown.

Mr. Williams comes from a long line of southwest Michigan black farmers. He began Vandalia Farms with Ms. Huffman in Detroit several years ago. He also taught other Detroit residents how to grow fruit and vegetables on vacant lots―and to make money from what they grew.

This past season, Mr. Williams also worked with OKT to build raised beds for demonstration gardens in southeast side Grand Rapids’ neighborhoods. In addition to farming and growing, Ms. Huffman also works as an experienced homebirth midwife. To her, the two occupations go hand in hand as healthier foods build healthier babies.

Vandalia Farms has since added a rural farm in Cassopolis. Be sure to sample the farm’s blueberries and chemical free vegetables when you visit Southeast Area Farmers’ Market next season!