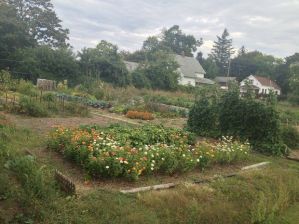 The Muskegon City Commission on has discussed the sales of produce from urban gardens. This garden is in the McLaughlin Neighborhood. (MLive/Dave Alexander)

The City of Muskegon has been debating the issue of what restrictions should be placed on urban growers who want to sell what they grow at local farmers markets. This debate, which is happening nationally, is an important debate, since it could have long term implications for food production and food justice.

On the surface, it seems reasonable for people living in urban spaces to grow food to sell, at either local farmers’ markets or food locations in their communities. Within the current economic framework, selling urban produce makes complete sense and is often one of the only options people have to make a living or supplement their income.

However, important distinctions must be made when talking about this issue. First, it is important to recognize that local communities are being confronted by the power of the Agribusiness sector, especially through their use of the State’s Right to Farm Act. (http://www.michigan.gov/mdard/0,4610,7-125-1599_1605—,00.html) The Right to Farm Act was established in the 1980s and driven by the Agribusiness sector. Thus, there is no surprise that this state law benefits those who are part of the current Agribusiness sector, which is reflected in the endorsement of groups like the Michigan Farm Bureau. (https://www.michfb.com/MI/Farm_Business_Resources/Natural_Resources_and_Environment/Right_to_Farm_Act/)

Further data shows that infant mortality among Latino and African American children is also higher, which is another indication that communities of color experience higher levels of poverty than do their White counterparts. Those experiencing poverty will have less access to healthy foods, both because of proximity to healthy food options and because of limited income. Those disproportionately higher levels of poverty in communities of color ultimately mean that health indicators are worse in those communities from a variety of factors, especially food access and diet.

For Our Kitchen Table, it is important that the City of Muskegon is discussing the issue of urban food growing. However, what we think needs to be included in the discussion and action that is taken, are important if food justice is to occur.

Urban food production should primarily benefit those most marginalized in the current Agribusiness food model. This translates into allowing people experiencing poverty access to public land for food production to improve their health. If more people have the opportunity to use public land to grow food, it will not only translate into better health for those experiencing poverty, it will also foster greater awareness about food justice and even challenge the current Agribusiness model, since those involved in urban food growing will see how they have been subjected to a form of food apartheid in Muskegon. What do we mean by food apartheid? The lack of access to healthy and affordable food and the proliferation of processed and fast-food establishments is the result of economic and race-based systems of oppression, which have historically imposed a bad food system on communities of color.