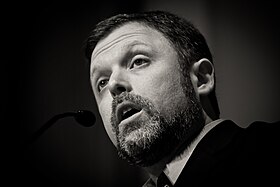 LINC UP! with Tim Wise, speaking on privilege, race and the effects that inequality has on the community. At Wealthy Street Theatre, 1130 Wealthy St SE, Grand Rapids, 6- 8 p.m. Oct. 1. Free; donation suggested.  Ticketed event. Must RSVP to info@lincrev.org.

“Tim Wise is among the most prominent racial equity writers and educators in the United States. Named one of ’25 Visionaries Who are Changing Your World,’ by Utne Reader, Wise has spoken in all 50 states, on over 800 college and high school campuses, and to community groups across the nation.”

Wise has been featured in several documentaries, including the 2013 Media Education Foundation release, “White Like Me: Race, Racism and White Privilege in America.” The film, which he co-wrote and co-produced, has been called “A phenomenal educational tool in the struggle against racism,” and “One of the best films made on the unfinished quest for racial justice,” by Eduardo Bonilla-Silva of Duke University, and Robert Jensen of the University of Texas, respectively. He also appeared alongside legendary scholar and activist, Angela Davis, in the 2011 documentary, “Vocabulary of Change.” In this public dialogue between the two activists, Davis and Wise discussed the connections between issues of race, class, gender, sexuality and militarism, as well as inter-generational movement building and the prospects for social change.

Wise speaks on the topics of: