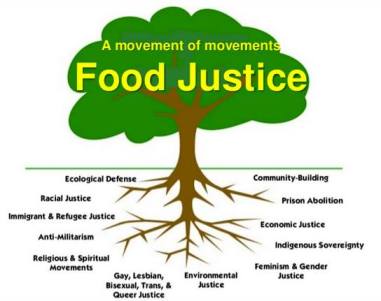 This is the second in a series of weekly posts highlighting OKT’s Food Justice series. You can download series handouts here for free.

Food Justice is an idea, a set of principles and something we should all strive to practice. More importantly, Food Justice is a movement and, like most social justice movements, it was born out of the lived experience of people experiencing oppression.

In many ways Food Justice grew out of the Environmental Justice
movement, where communities of color and poor working class people began to realize that their lack of access to healthy and affordable food
was not the result of their own behavior, but of a food system that was
motivated by profit.

It is fashionable for people to talk about how people who are living in
poverty also live in a “food desert.” What they generally mean is that
people don’t live close to a grocery store. Using the term “food desert”
is problematic in many ways. First, a desert is a vibrant eco-system and
not a barren wasteland, as is often associated with the term. Secondly,
identifying neighborhoods as food deserts ignores history and fails to
acknowledge that most of these neighborhoods had small grocery stores, farmers markets, fruit & vegetable stands and lots of backyard gardens. However, economic and political decisions driven by the current industrial food system resulted in neighborhoods being both abandoned and undermined, often resulting in food insecurity.

Therefore, it would be more accurate to say that neighborhoods
experiencing a lack of access to healthy, affordable food are communities experiencing Food Apartheid. Food Apartheid explains that a small number of people (agribusiness) determines the kind of food system that  the masses can access. Like the Apartheid imposed on Black South Africans, Food Apartheid means that few of us have a say in the current food system.

The movement for Food Justice is changing Food Apartheid. Armed
with the notion that everyone has the right to eat healthy, food justice
advocates engage in more locally grown food projects, sharing skills

on how to grow, prepare and preserve food, while exposing the current food
system’s unjust nature .

The Food Justice Movement is an international movement that is ultimately
fighting for Food Sovereignty, where everyone has say in the kind of food system(s) they want. Food Sovereignty is Food Democracy, where healthy food is a right for everyone―not just for those who can afford it. Here is a list of Food Justice principles that Our Kitchen Table supports and promotes:

Eating Healthy Food is a Right! The current global food system must be resisted and dismantled. For more information on ways to practice Food Justice in your community, contact Our Kitchen Table.