This is the sixth in a series of weekly posts highlighting OKT’s Food Justice series. You can download series handouts here for free. 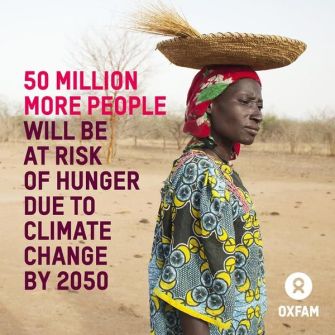 “Wild weather and unpredictable seasons are changing what farmers can grow and is making people hungry. Food prices are going up. Food quality is going down. Soon, climate change will affect what all of us can eat.”
—OXFAM

This opening statement from the international organization OXFAM introduces its investigation into the connection between Food Justice and Climate Justice. According to the Inter-governmental Panel on Climate Change (IPCC), which is made up of thousands of the world’s leading climate scientists, our current food system is one of the main contributors to climate change.

Driven by increasing profits, the current food system contributes to climate change in the following ways:

1) Agribusiness practices mono-cropping, where large portions of land are devoted to growing one kind of crop. This kind of land usage not only increases the need for additional water, it degrades the quality of the soil and causes soil erosion.

2) Agribusiness completely depends on fossil fuels to grow and harvest food, thus contributing significantly to warming the planet. In addition, most food grown does not stay local. The average food item travels 1,000 miles before it is consumed, increasing the current food system’s dependence on fossil fuels even more.

3) The current food system promotes high levels of meat consumption, particularly in the US. Producing so much meat diverts large amounts of water, increases levels of methane gas and requires more land use to raise feed, resulting in deforestation and the release of more carbon dioxide into the atmosphere. All of these factors further contribute to climate change.

4) The current food system produces highly processed foods that cause the many health problems we currently face. The energy and resources used to manufacture and distribute the high volume of unhealthy processed foods are also contributing to climate change.

While the world’s wealthier regions (specifically North America and Europe) are responsible for much of the current climate change crisis, its negative impacts
disproportionately impact regions of the world with higher levels of poverty. This is also true within the United States, where the communities most
negatively impacted by climate change are the same communities most
neglected by the current food system. This is why Our Kitchen Table
recognizes the relationship between food justice and climate justice. We
recognize that in order to have food justice, we need climate justice as well.

Here’s how you can practice climate justice alongside food justice:

You can learn more about climate change and food
justice in the zine, Organizing Cools the Planet, www.organizingcoolstheplanet.wordpress.com.

For information on OKT’s food justice resources and
campaigns, contact us at OKTable1@gmail.com  or
616-206-3641. Or, visit our website at www.oktjustice.org/.