Note from OKT: Residents need to know that lead is also prevalent in the soil in GR’s SE neighborhoods, as these areas were once orchards treated with lead-containing pesticides. Soil testing and covering lead-contaminated soil with wood chips to keep lead out of children’s bodies is another important step in lowering lead poisoning. 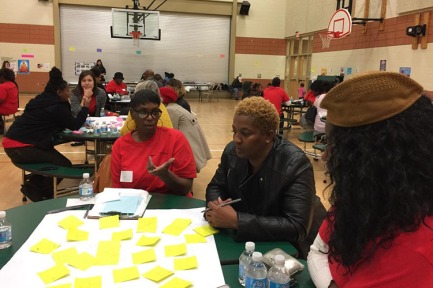 When Lyree Adams’ daughter, LaRissa Adams, was two years old she tested positive for lead poisoning. Then, Adams resided in the 49504 zip code, which continues to be one of the Grand Rapids areas with high numbers of lead poisoning among children. After finding out the outcomes lead poisoning could have on her daughter, Adams did everything in her power to advocate for her family with her landlord, and managed to have the windows in her home replaced at no additional cost to her.
“The dust from the paint on the windows was responsible for the LaRissa’s high levels of lead in her body,” shares Adams.

Present day data demonstrates that lead poisoning in children living in the 49507 zip code has increased by 40 percent during just the past two years. According to the Center for Disease Control and Prevention, no safe level of lead in the blood for children has been identified. When children test at a level of 5 micrograms per deciliters to identify children with levels higher than most children. Grand Rapids neighborhoods are among the most affected by lead poisoning in the state of Michigan.

“More children were lead poisoned in 49507 than all seven Flint zip codes combined—before, during, and after the Flint water crisis,” shares Paul Haan, executive director of Healthy Homes Coalition.

Even though it has been close to a decade since LaRissa was diagnosed, Adams has not stepped away from advocating for a Grand Rapids free of lead poisoning, especially black children, according to data are being affected by lead poisoning at significantly higher levels than white children in the city of Grand Rapids.

According to Haan, the higher incidence in these zipcodes is also related to the age of the houses—most being around one hundred years old.

“There is more distressed housing in these zip codes, and perhaps by renovation being done by untrained, uncertified labor. Under federal regulations, contractors, landlords, and their maintenance staff that disturb lead-based paint must be trained, certified, and use lead-safe work practices. It’s clear that this is not always the case when renovations are being done in these neighborhoods,” shares Haan.

Lead can be found in the interior and exterior paint of homes built before 1978, which was the same year lead based paint was banned—and most houses in the city of Grand Rapids were built before that year.

“Where we live shouldn’t matter. If there is something wrong, then something should be done about it,” shares Adams.
Tabitha Williams, a resident on the southeast side of Grand Rapids, got involved because her children were being affected, and her backyard tested positive for lead. For Williams, getting involved meant getting connected with Healthy Homes Coalition.
Williams believes the answer to ending lead poisoning in the city of Grand Rapids must involve educating the residents most affected by the problem.

“The first thing we need to do is educate us, then we go advocate and speak on behalf of our children,” says Williams.

According to research conducted by the U.S. Department of Housing and Urban Development and the U.S. Environmental Protection Agency, one gram of lead dust is enough to make 25,000 square feet of flooring hazardous for young children. In other words, the equivalent of a packet of Sweet’N Low is just the right amount to contaminate the floors of a dozen homes in the city of Grand Rapids, according to Haan.

The resident explains feeling let down by her community and those in power. As a black woman she explains, “I am already affected financially when accessing economic opportunities, and then to count us out of a healthy environment is a huge letdown.”

Adams and Williams have chosen not to remain silent in the face of adversity and are rallying their friends, families, and neighbors to tackle the problem of lead. The pair has joined the group known as Parent for Healthy Homes and hosted an event the evening of Monday, October 30th at Dickinson Cultural Center, a Grand Rapids Public School located in the 49507 zip code.

“There have been a lot of things done in our community to prevent lead exposure over the years. While these things initially worked well, they are no longer resulting in fewer children being poisoned as they used to. I think parents know how we can do better by our kids, and how we can help them to stop hurting,” says Haan.
Lisa Matthews, resident of the 49507 area and grandmother to Trayvon, who is only three years old but has already tested at at a level 9 deciliters of level in his blood. Matthews found out Trayvon tested positive thanks to the Michigan Medicaid policy requiring children be tested at one and two years of age, and those who have not been tested must be tested at least once between the ages of three and six years. Children not tested must be tested at least once between the ages of three and six years.
Matthews explains that since finding out, she has done everything she can to help Trayvon’s blood levels go down and has managed to his down to a level five out of eleven. As Trayvon’s primary caregiver, Matthews wants to ensure she advocates at every level she is able to so that no other children are faced with the same health concerns Trayvon has.
Adams suggested “reciprocity agreements” with landlords: “If a renter has to give a deposit to a landlord, shouldn’t the landlord have to give some kind of guarantee that the property is lead-free?” she posed to the group.
According to Kent county law, houses aren’t required to be tested for lead. A property owner can sell, rent, or remodel a home without checking it for lead or lead hazards. The last time the city of Grand Rapids updated its housing codes regarding lead was in 2005, which requires landlords to remove all loose paint and paint chips.
Haan explains that a correlation exists between the current housing crisis and the increase in lead poisoning.

“With West Michigan’s robust real estate market, it’s harder now to find healthy homes to live in. The seller’s market is great for sellers but not necessarily good for buyers and renters,” shares Haan.

Setting funding aside to ensure testing is done in homes was among the possible solutions suggested by the residents present at the event.

Last fall, Grand Rapids was awarded $2.9 million in HUD funding to fix homes with lead-based paint hazards. Typical fixes include new windows and exterior painting or siding. The HUD funding is available to eligible homeowners, landlords, and tenants and the city of Grand Rapids administers the funding locally.

To eliminate lead poisoning from Grand Rapids, Haan suggests, “Older housing should be inspected so that owners and tenants can know if there are hazards present. And then it must be maintained to control those hazards.”