It’s not to late to donate to Team OKT! Click here! 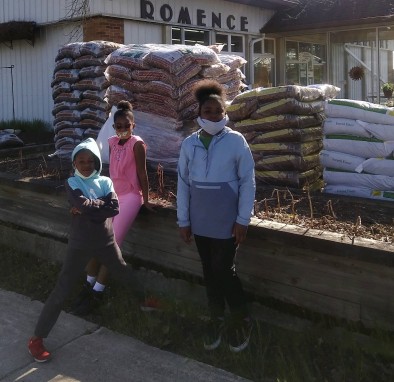 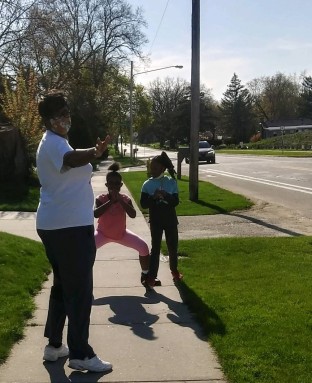 Doris Johnson and her grandchildren completing the #Walk4GoodFood2020

For the past 42 years, hunderds of folks from all over the greater Grand Rapids area have walked annually to raise funds to help those with income challenges to access healthy food. Access of West Michigan did not let COVID-19 sideline the tradition. Instead of gathering walkers for one walk downtown, the #Walk4GoodFood2020 was completed by individuals and family groups who walked following social distancing guidelines during their own chosen times between May 3 and May 13.

Our Kitchen Table’s team included 29 team members. A special shout out to our Program for Growth participants who joined up!  Team OKT met its fundraising goals. In addition, corporate sponsor, Edenz, donated $500.

As a #Walk4GoodFood recipient agency, OKT will use funds received to help support its Southeast Area Farmers’ Market.

It’s not too late to join the OKT virtual walk team! Pick your day and time to walk!

In light of the COVID-19 Pandemic, the Walk for Good Food will take place in your own neighborhood. Access of West Michigan is asking us to walk individually or with our households, staying six feet away from anyone else, of course. OKT will post updates as we get them. For specific details, visit the Walk For Good Food Website. Funds from the Walk help OKT run the Southeast Area Farmers’ Market.
How can you get involved?

For more information, visit our Walk for Good Food Website.

OKT and co-sponsor, Access of West Michigan, are excited to bring activist, farmer and educator, Remi Harrington, to Grand Rapids as part of OKT’s 2019 Women of Color Convening series. The FREE event takes place May 16  at Sherman Street Church, lower level, from 6 to 8 p.m. The event will kick-off with a food demo and sampling featuring bulk whole foods from OKT’s Collective Whole Foods Purchasing Group.

In Kalamazoo, Harrington grows food at her own urban community farm, “Tegan’s Hopeful Storybook Garden,” and empowers others to plant their own urban food gardens through her work as community farms coordinator for Kalamazoo Valley Community College Food Innovation Center. She has a vision for local urban farmers becoming a mainstay in Kalamazoo’s local food economy. At the convening, Harrington will lead the dialogue about “Building collective consciousness about what local foods can mean to us as a people.”

The work of Access of West Michigan’s Good Food Systems Initiative aims to address food access, health, and justice in our local food system. We believe that the values of a Good Food system create a thriving community for all. The collaborative solutions and programs that Access facilitates equip community partners, invest in our local food economy, grow health, and convene food and faith conversations.

As an Access of West Michigan Walk for Good Food recipient agency, OKT invites you to attend its 25th Anniversary Feedback Concert with Local Spins and Founders Brewing Co. Come for some great food, drink, and music – and know that your fun time will benefit Access’s mission to build holistic solutions to poverty.

The lineup for the evening includes:
Below are some of the Silent Auction items  – over $1,000 of great items and gift cards.

For the second year in a row, Access of West Michigan has asked agencies receiving funds raised by the walk to attend a half-day food justice training. This reflects Access’s commitment to not only provide food to the hungry as charitable endeavor bit to also address the root causes of hunger and under-nutrition, globally, nationally and locally. In fact, Access changed the name of the walk this year to reflect that change in direction What was the Annual Hunger Walk is now the Walk for Good Food.

Access explains its rationale for the name change, “we together seek to cultivate a Good Food System. Namely, a system in which healthy (food that provides nourishment and enables people to thrive), fair (food that no one along the production line was exploited during its creation), affordable (food that all people have access to), and green (food that was produced in a manner that is environmentally sustainable) food are available to all. “

To get the conversation started, Spady shared a spot-on music video, Food Fight: Bullies Poisoning the Hood Get Splattered.

The dialogue continued by having small groups come up with their own working definitions of food justice, food security and food sovereignty. As Access, OKT and other agencies share the message of how a just food system is the real answer to hunger, under-nutrition, and the many disease caused by nutrient-poor foods, we can hope that communities and countries will wake up and work to ensure that food is viewed as a human right and not just a profitable commodity.

More information and a podcast here.

Food banks and food pantries have proliferated in response to an economic emergency. The loss of manufacturing jobs combined with the recession of the early 1980s and Reagan administration cutbacks in federal programs led to an explosion in the growth of food charity. This was meant to be a stopgap measure, but the jobs never came back, and the “emergency food system” became an industry. In Big Hunger, Andrew Fisher takes a critical look at the business of hunger and offers a new vision for the anti-hunger movement.

From one perspective, anti-hunger leaders have been extraordinarily effective. Food charity is embedded in American civil society, and federal food programs have remained intact while other anti-poverty programs have been eliminated or slashed. But anti-hunger advocates are missing an essential element of the problem: economic inequality driven by low wages. Reliant on corporate donations of food and money, anti-hunger organizations have failed to hold business accountable for offshoring jobs, cutting benefits, exploiting workers and rural communities, and resisting wage increases. They have become part of a “hunger industrial complex” that seems as self-perpetuating as the more famous military-industrial complex.

Fisher lays out a vision that encompasses a broader definition of hunger characterized by a focus on public health, economic justice, and economic democracy. He points to the work of numerous grassroots organizations that are leading the way in these fields as models for the rest of the anti-hunger sector. It is only through approaches like these that we can hope to end hunger, not just manage it.