Grand Rapids Food Co-op is hosting Jon Steinman, author of Grocery Story, an in depth exploration of cooperative grocery stores and how they differ from the commercial sector. Jon will be offering an engaging presentation with time for discussion, book signing.

Who Owns Your Grocery Store?
New book about consumer-owned grocery stores pulls back the curtain on the grocery giants. Food has become ground-zero in our efforts to increase awareness of how our choices impact the world. Yet while we have begun to transform our communities and dinner plates, the most authoritative strand of the food web has received surprisingly little attention: the grocery store―the epicenter of our food-gathering ritual. 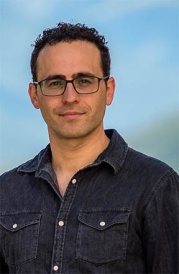 Through penetrating analysis and inspiring stories and examples of American and Canadian food co-ops, Grocery Story makes a compelling case for the transformation of the grocery store aisles as the emerging frontier in the local and good food movements. Author Jon Steinman:

Grocery Story is for everyone who eats. Whether you strive to eat more local and sustainable food, or are in support of community economic development, Grocery Story will leave you hungry to join the food co-op movement in your own community.

Jon Steinman is the producer and host of the internationally syndicated radio show and podcast Deconstructing Dinner (2006-2010) and of Deconstructing Dinner: Reconstructing our Food System – a television and web series currently streaming online. Jon was an elected director from 2006-2016 of the Kootenay Co-op – Canada’s largest independent retail consumer food co-op, serving as Board President from 2014-2016. He lives in Nelson, British Columbia. www.deconstructingdinner.com

The Grand Rapids Food Co-op is offering a Community Town Hall on Tuesday, October 30 at 6 pm at Brown-Hutcherson Ministries, at 618 Jefferson Ave SE. The Grand Rapids Food Co-op is a committed group of people from all walks of life who have been working together for the past four years to bring a community owned, full-service grocery store to central Grand Rapids, specifically to the part of town that has the least access to fresh, healthy, local and affordable food.

This Town Hall will provide participants with information about the food co-op including:

The event will also include a discussion session and the choice to join the co-op and become actively involved in creating and bringing this amazing store into being. This is truly a grassroots project to meet a deep need and empower our entire city.

So come on out to the Grand Rapids Food Co-op’s Community Town Hall at Brown-Hutcherson Ministries, at 618 Jefferson, SE. on Tuesday, October 30 at 6 pm. Refreshments will be included and the event is free and open to everyone. 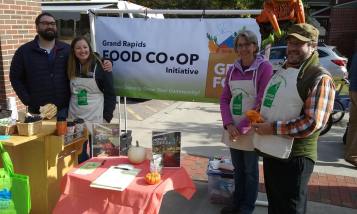 Saturday Nov. 12 is the last day of this year’s Southeast Area Farmers’ Market. The market is open 11 a.m. to 3 p.m. at MLK Jr. Park, 900 Fuller Ave. SE. The Grand Rapids Food Co-op Initiative will be on hand to answer questions about their plans for increasing access to healthy foods in center-city Grand Rapids. Here’s how they describe their work:
“Grand Rapids is coming together to build a full-service grocery cooperative near downtown. We’re really excited to create a new place for community. Our space is intended to bring people in for more than groceries. We hope it will be a welcoming place for everyone in Grand Rapids. We hope people will spend their free time here. We want friends to meet for a sandwich from the deli, a coffee from the cafe, or some wine they bought off the store shelf. We want to have inviting common areas where people feel comfortable to just hang out and be. We want to gather the community for events like educational workshops on everything from healthy eating to sustainable food systems. Or maybe to watch and discuss a documentary. Or listen to some live music!
We want this place to represent Grand Rapids. We are a diverse city and we want our space to reflect that fully. We hope member-owners of every age, race, income and opinion will shop for healthy food, engage in conversations, and grow personally.”
For more information, visit their website or Facebook page.