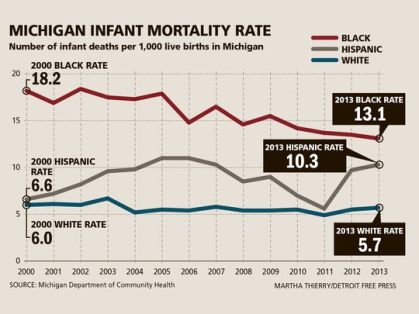 During the first year of life, twice as many black babies die in Kalamazoo and Grand Rapids (11.9 per thousand) than white babies. In Muskegon, the numbers are even higher. To take a look at why these numbers continue to plague infants born to black women of all socio-economic and educational levels, Partners for a Racism-Free Community sponsored a Nov. 30 program, “A Deeper Look at Racism and Infant Mortality.” Breannah Alexander, director of strategic programs, facilitated the dialogue that featured Cathy Brown, from the YWCA Kalamazoo, and Celeste Sanchez-Lloyd, from Strong Beginnings.

Black babies die at double the rate of white babies across the nation. Michigan ranks 40th in terms of good infant outcomes. However, first generation black babies, i.e. babies born to immigrants just coming here from Africa, have the same infant mortality rate as white babies. This leads to the conclusion that the stress of living day to day in a racist environment is a factor in babies dying.

“This has to do with racism, the stress of not belonging, not feeling welcome,” Alexander said. “It’s everywhere in the US, regardless of income. However, poverty is another stress factor for most African Americans. Poverty is the thing we see first; we understand it. It does have an effect but not the only effect. Being black, regardless of income, doubles the risks for infant mortality and low birth weight.”

The YWCA Kalamazoo and Strong Beginnings, in Kent County, are taking intentional steps to keep more black babies alive. Sanchez-Lloyd noted that Strong Beginnings community health workers empower the families they serve by offering in-home mental health support, family planning guidance, a fatherhood program as well as help with housing, transportation and employment. These strategies not only create a healthier environment for pregnant black women but also help alleviate some of the stressors impacting them. “We are looking to save that baby but also to making an intergenerational change,” she said. 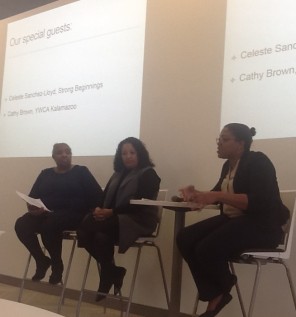 Brown, who works in programs that offer support to victims of domestic violence, notes that black victims who are pregnant face even higher levels of stress. The YWCA Kalamazoo program seeks to meet women where they are at and figure out intentional ways of helping them carry heathy babies to full term.

Both presenters also spoke about the institutional racism pregnant black women face when seeking medical care. Providers routinely ask them about “baby daddies,” illicit drug use or simply assume that the pregnancy was unplanned and that they are not living a healthy lifestyle. Because many black women are using low cost clinic services, they are afraid to report such treatment for fear they may lose all access to medical treatment. Notably, Grand Rapids is the most segregated city in Michigan and among the five most segregated cities in the nation.

OKT’s Lisa Oliver-King was in the audience and related how her white OB-GYN mistreated her when she went in for her initial exam after discovering she was pregnant. “I had just finished my masters’ degree. My husband and I had the very best health insurance. This was our first and planned pregnancy. The doctor spoke down to me in a very condescending manner. He even asked me ‘How many sexual partners do you have?’”

A white, OB-GYN nurse in the audience says she has noticed this treatment of pregnant black women where she works. She is making efforts to raise awareness. She noted that where she worked, 75% of back women were suspected of drug abuse and referred to screening whereas only 25% of white women were. She believes this discrepancy is due to racism. This discrepancy has been noted and new initiatives will require all women to be routinely screened.

OKT believes that other factors impacting infant mortality include diet and environmental toxins. Across the board, women rarely eat a well-balanced diet including 80 grams of protein each day. Physicians don’t often provide sufficient nutritional advice and can tend to stoke fears of weight gain. This may influence women to eat less in the final months of pregnancy when the infant needs the most nutrition. Women of color living in neighborhoods without access to healthy foods face additional barriers.

Recent research has shown that organophosphate pesticides, fire retardants in clothing and furniture, compounds found in most plastics and on every electronic receipt are linked to premature labor and, low birth weight as well as autism, hyperactivity, lower IQ and cerebral palsy in children. Girls exposed in the womb have more risk for emotional illness; boys are more prone to aggression. (Organophosphates were first developed for deadly chemical warfare and later modified for use as pesticides.) Urban neighborhoods with income-challenged residents, most often people of color, have higher incidence of environmental toxins.

Another consideration is the American way of birth. As a nation, we rank 58th in infant mortality. That means, 57 other countries are a safer place to have a baby. (Cuba is one of the safest.) “Other countries recognize the value of health. They offer comprehensive sex education, comprehensive healthcare, lengthy maternal leave,” noted audience member, Peggy Vander Meulen, who is program director at Strong Beginnings. “Here we also have wealth disparities and racism. It’s political will. Are we going to fund wars and tax cuts for the wealthy or are we going to fund health and education?”

Progress has been made in Kent County. Vander Meulen reported that the 2003 Kent County black infant mortality rate was five times higher (22.3 per thousand) than white infants; today it is two times higher.  “We have made a lot of progress,” she said.  “We’re not there until there is no disparity. If we get to Cuba’s rate, I can retire.”

Alexander concluded that stress experienced related to racism is an undervalued part of the conversation. Sanchez-Lloyd agreed. “Black women carry the burden of being black, the weight of it every day, living in the white culture,” she said. “When I was pregnant, I remember the added stress of watching African American men get shot on TV and having to wonder if my husband, who is a police officer, would be shot when not in uniform, just for driving while black.”

Each year, Strong Beginnings provides a nice lunch, an interactive educational presentation and a time to celebrate women of color who are considering breastfeeding or are currently breastfeeding. If interested, please register — you are also welcome to bring along a supporter. 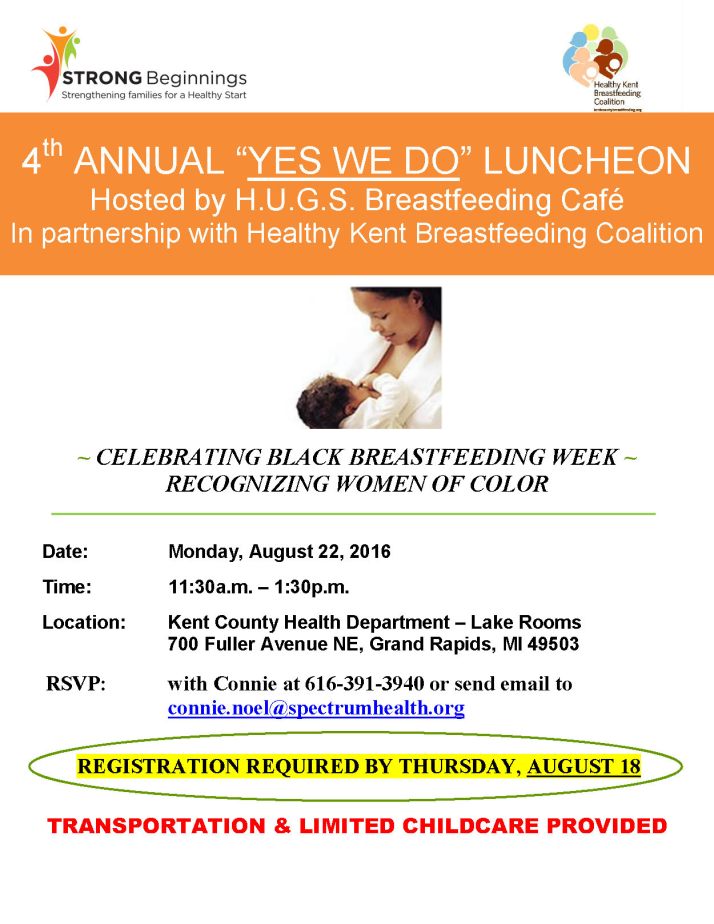