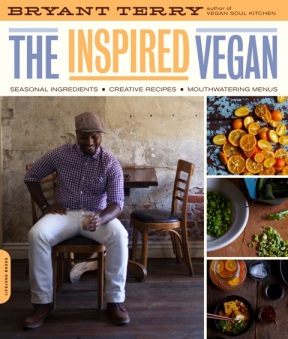 Eco-chef, food justice activist and author, Bryant Terry will meet with Our Kitchen Table and community members for dialogue from 2 to 4 p.m. Saturday Jan. 21 at Sherman Street Church, 1000 Sherman St. SE in Grand Rapids. If you’d like to be better prepared for the dialogue, Terry has recommended we read Body and Soul: The Black Panther Party and the Fight against Medical Discrimination by Alondra Nelson.

Terry’s stop in Grand Rapids kicks off the release of his new cookbook, The Inspired Vegan. He is here principally to participate in Calvin College’s Wake-up Weekend, which includes a Friday evening lecture, “Cooking as Inspiration for Liberation” and a Saturday morning brunch and panel discussion featuring OKT’s executive director, Lisa Oliver King. Hosted by Brick Road Pizza, 1017 Wealthy Street SE. the free panel discussion takes place at 10 a.m. with brunch following at a cost of $12 per person.

Terry’s other books are Grub and Vegan Soul Kitchen. He has appeared on the Sundance Channel’s original TV series “Big Ideas for a Small Planet,” the BET series “My Two Cents” and on PBS’ “Nourish: Food + Community” and “The Endless Feast.”

Enjoy this brief clip of Terry talking about food discrimination: