Farm Open Houses are an opportunity to celebrate our community together and explore the farm. Come when you can, stay as long as you are able, and share a farm-fresh meal with the Urban Roots staff. There’s a seat for everyone at the table. (And all the fresh strawberries you can eat.)

For the second week in a row, OKT is canceling the Southeast Area Farmers’ Market. Construction continues to block access to our market site at MLK Jr. Park. We were not informed in advance that construction was to take place. We apologize for not being able to bring you fresh local produce. We are working to make sure the market can take place at MLK Jr. Park or at another location on Oct. 21.

Meanwhile, you might want to shop these markets for your fresh fruits and veggies:

Come be a kid with us! Have fun with Urban Roots exploring the farm with magnifying glasses and learning all about the heroes and villains of the garden. Even if you don’t have a garden, you will love this class! Urban Roots’ workshops are fun, down to earth, and a great way to check out it sotherprograms. This class is VERY kid and family friendly.

The workshop is free, though Urban Roots does appreciate donations to help defray costs. 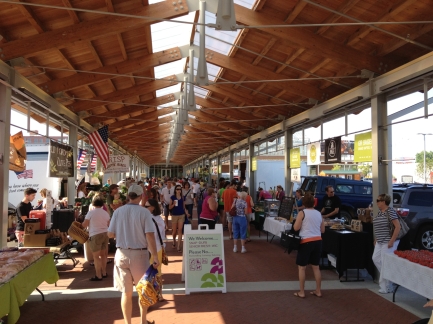 On Monday Sept. 14, Urban Roots hosted a panel discussion at the Wealthy Theatre titled “Support Local Food: A conversation on access, growing, and the local food economy.” An organizer of the event contacted Our Kitchen Table to ask if we would like to represented on the panel for the event, which was to continue the conversation started by Urban Roots‘ Levi Gardner in his recent opinion piece, a critique of the Downtown Market’s failure to address food insecurity in the neighborhood where it is located. We were excited to at long last be part of such a public conversation.

Since the Market was in its planning stages, OKT has raised concerns about it to planners, city commissioners and our own constituents via our website and food justice classes. Initially, OKT raised concerns that such a market project, using substantial public monies, should only proceed with input from food insecure neighbors and have a goal of improving food security in the neighborhood, which offers income challenged residents here nearly no access to affordable, healthy foods (other than through charities). After the Downtown Market Farmers’ Market opened, OKT again raised concerns that it did not provide a welcoming atmosphere for income challenged people and most of its product was far too expensive.

During last Monday’s event, the panelists did deliver an animated discussion about the challenges of building an equitable food system; the high costs and small returns experienced by small local farmers; and the need for an alternative to the failing industrial food system as well as a heart touching testimony shared by a long-term Heartside resident.  However, OKT had hoped to challenge the Downtown Market with these questions:

Let’s get back together and get some answers to these questions. Together, we can make the Downtown Market a place Grand Rapids can really be proud of. Not only because foodies from across the country make it their destination, but also because it is helping to bring food security to its income challenged neighbors whose health is currently being ravaged by nutrient-poor diets.

Urban Roots:When Everything Collapses Plant Your Field of Dreams

The Southeast Area Farmers’ Market is one facet of Our Kitchen Table’s Food Diversity Project. Another is supporting urban neighbors as they grow food in containers, raised bed gardens and community gardens. OKT often confers with Detroit’s urban gardeners as they are so good at what they do. According to our sources there, Detroit’s urban neighborhoods are food self-sufficient. The neighbors living there are growing enough food to feed themselves. This is OKT’s goal for Grand Rapids.

OKT takes a different stance than those who approach urban farming as an agricultural business. True food self-sufficiency entails neighbors growing food, sharing food and foraging native fruits, nuts and greens as well as managing their own farmers’ market alternatives—alternatives without profits as the overarching goal.

Detroit’s gardens have flourished because they are grown by community for community. Recent developments, such as the Hantz Farm are a direct threat to these gardeners. The Detroit Food Justice Task Force sees the Hantz Farms as a land grab that will negatively impact food security there. Hopefully the voice of the people will prevail and their gardens will continue to provide nutritious food for their families.