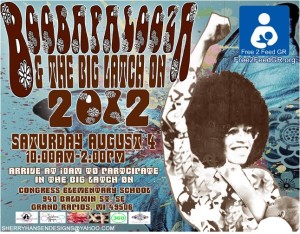 BOOBAPALOOZA: The Big Latch On
(international breastfeeding in unison event)

To mark this occasion, thousands of breastfeeding women, their babies and children across the world will gather in their own communities to take part in the Big Latch On, a synchronized breastfeeding event in multiple locations.

The first Big Latch On took place in Aotearoa New Zealand in 2005. It was introduced to the US in Portland, Oregon in 2010. In 2011, 5687 women participated in the Global Big Latch On, including 57 moms and babies right here in Grand Rapids. This year organizers of the event are aiming to help break the world record. The Big Latch On is informed by the principles of community development, providing the opportunity for breastfeeding women to get together in their local communities, host their own events, and identify opportunities for on-going support.
Free 2 Feed GR’s big goal is to establish a local resource guide to mothers to find establishments in Grand Rapids who support nursing mothers by simply allowing them to nurse wherever they are otherwise allowed to be. This will be the first resource guide of its kind, meaning Grand Rapids could be the first ‘official’ Free 2 Feed city in the country. Free 2 Feed GR’s goal is to promote breastfeeding as a normal, healthy and respected choice within the Grand Rapids community and beyond.