This is the tenth in a series of weekly posts highlighting OKT’s Food Justice series. You can download series handouts here for free.

According to the US Department of Agriculture, the number of farmers’ markets in the US increased from 1,700 in 1994 to more than 8,200 in 2014.This increase demonstrates the growing public interest in eating more fresh produce and supporting local growers. Farmers’ markets also provide people an opportunity to have regular interaction with local farmers, develop relationships and have a greater appreciation for what it takes to grow food, especially outside of  current agribusiness models.

However, having more farmers’ markets doesn’t necessarily result in a more just food system. In some ways, they can perpetuate the current food system’s
inequalities. For example, a farmers’ market that is part of a larger urban development plan often benefits those with economic and racial privilege. These markets charge more for produce and other food items use public dollars without public input and often contribute to urban gentrification.

When looking at farmers’ markets through a food justice lens, the market should not contribute to further inequity or sustain the current food system, which creates and perpetuates food insecurity. A farmers’ market that practices food justice would deliberately make it a priority to serve the nutritional needs of those most negatively impacted by the current food system. It would target communities of color, working class communities and communities experiencing poverty. 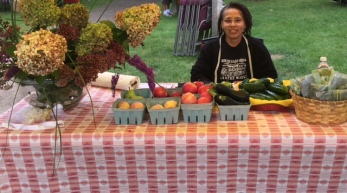 These communities consist of people receiving government food assistance like SNAP, WIC and the Double Up Food Bucks programs. The food justice movement and public health sectors have been pushing for more food assistance for purchasing fresh produce and even vegetable plants for those who want to grow their own food.

While such programs are subsidized by public money, the dollars spent on government food assistance programs pales in comparison to the public dollars supporting large corporate agribusiness. While neither subsidy is sustainable, Our Kitchen Table supports subsidizing communities experiencing poverty until our food system is truly democratic.

Last, farmers’ markets should not end up being niche markets, but rather venues for both transforming the current food system and creating new food system models. In addition to providing more fresh food purchasing options, a farmers’ market that practices food justice should also educate the community about the food system and share resources and skills that empower people to collectively become more food independent, for example, cooking resources, food preservation workshops, seed exchanges, information of food policy challenges and even the development of food cooperatives. In other words, a farmers’ market that practices food justice should not only be a means to resist the current agribusiness food model, but also provide a venue for people to create truly democratic food systems that ultimately lead to food sovereignty.